Here, you will find information on qualitative research and a variety of suggestions to bear in mind when planning to carry out fieldwork in Spain. Most of the tips and articles are coined by us but we are very much in favour of making reference to other author's links whenever we consider they may be useful to market research practitioners.

In an age of hyper-competition in virtually every industry, and rising consumer expectations, it seems curious that anyone would be criticized for listening to their customers. But even as the exhortations to be customer focused have grown louder, one of the key tools for good listening – the focus group – regularly comes under criticism.

One of the most influential books of the last decade, The Cluetrain Manifesto (2001), by Christopher Locke, Rick Levine, Doc Searls and David Weinberger, urged organizations to “come down from their Ivory Towers and talk to the people with whom they hope to create relationships.” Customers, they said, “have ideas for you too: new tools we need, some better service. Stuff we’d be willing to pay for,” and urged leaders to listen.

Listening, then, is a good thing. Few would argue that listening is what organizations must do. But some still insist they must not use marketing research techniques – especially focus groups – to do that listening?

In 2009, Catharine P. Taylor, writing for The Social Media Insider in an article titled, “Listen Up Marketers: The Focus Group is Dead,” references several examples of high profile reversals resulting from “not listening.” The Tropicana packaging change, the Motrin ad that offended mommy bloggers, the widely criticized name change of Syfy for the Sci-Fi channel, and Facebook’s 2009 design changes. When you deconstruct her article, you see that most of the examples are actually related to another phenomenon. Facebook made its 2009 format changes “without user input,” according to Taylor. No focus groups there.

Tropicana and Sci-Fi didn’t talk to “loyalist” customers, although they did do research. They may have done the wrong research. And Syfy changed their name even after they heard from their loyalists. 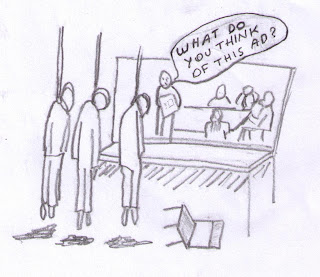 People tend to blame focus groups for all manner of poor judgment; for the innovative products that supposedly don’t get launched and for the good ideas that apparently are killed because of focus groups. But the question really is, did the focus group kill a good idea, or did it save the organization a ton of money on a potentially failed marketing effort?

Pity the poor focus group, a multi-function tool being blamed for the mistakes of its users. It’s like blaming the chairs at a dinner party for the quality of the food. When you look closely at most of these articles so critical of the focus group, the writer is usually trying to make quite a different point – they are usually trying to expose management cowardice or poor leadership that relies too much on research and those who won’t take a position of their own.

Malcolm Gladwell, author of Blink, is often thought to be the one who really put a stake in the heart of the focus group. In a speech to an advertising agency conference in 2005 he said,

Market research, when it is observational or when it is interpretative, is profoundly useful. But those are two critical things. They require the intervention of the person conducting the research. They require the findings that are gathered are considered,  and thought about, and processed and interpreted. (3)

So Gladwell’s real argument is for nuance, for finesse, and for brains in research – not for ceasing to research. He suggests that the aesthetic of the Aeron chair was disliked in focus groups because it was so unfamiliar (despite rating very high on comfort). That Herman Miller management chose to go ahead with a launch of the chair despite these findings and generated a massively successful product, is taken to mean the focus group did not do its job.

But perhaps this is a story of a focus group doing its job well, and management doing its job well too. Management knew what initial reactions to the new product would be and could plan accordingly. The history of the Aeron chair on the Herman Miller website in fact makes it clear that extensive consumer research, including focus groups, informed the development of the product.

The focus group is often criticized as the wrong tool for product innovation. It is true that people don’t always know what the solution to their problems is, but they usually have a pretty good understanding of their problems.

Innovations come about because of a deep understanding of the customer experience. Organizations develop this deep knowledge by consistently talking to users, customers, and consumers.

The Listening Epidemic
The denigration of formal listening and insight processes – otherwise known as research –is not isolated to business. In the political sphere, the overall spending on opinion research by a given administration is viewed as governing by poll or similar criticisms. If our governments did not consult voters and taxpayers through research tools – including focus groups – they would be influenced only by the people they speak to directly.

Would we really be better off without qualitative research and its flag-carrier, the focus group? Or would a handful of bloggers and lobbyists drown out the voices of others?

The truth is, we live in a very complex world. Managers and executives are risk averse for good reason: mistakes are expensive in real dollars and in career terms. Making strategic decisions involves finding your way through complex information and often competing agendas.

So one might be sympathetic to a client that wished for research to actually make the ecision for them, instead of informing their decisions.

But research does not set strategic direction – managers do that. Your outside researcher, who spent many hours poring over the fieldwork, can give you an informed, independent and often very valuable viewpoint. But they should not make your management decisions. It would be nice to think that effective listening to customers could happen without all the infrastructure of the research industry, but this is wishful thinking. To gain the most insight, the listening process is best done with enough structure to assure validity.

Raise the Bar on Research
Instead of firing the focus group, we need to raise the bar on the researchers. You raise the bar by insisting on a professional, for a start. The act of asking a question doesn’t make it a good question. Many people have the skills needed to lead a group discussion, but that doesn’t make it a focus group. You find professionals by finding people who are engaged in their professional organizations, constantly investing in their own learning and the learning of others.

We need to raise the bar on ourselves as consultants and advisors. The Qualitative Research Consultants Association (QRCA) is actively engaged in providing education for its members and other professionals who use research for that reason: to improve the chance of qualitative research playing a key role in guiding and advising important management decisions.

The marketing research industry does have challenges. But it is far from stagnant. In fact, this industry has rapidly embraced the potential of new communications technologies to connect with people faster, cheaper, and in richer ways. We are, in fact, an industry of professional listeners. Our collective mission is to make the world a better place through the power of our listening and insight. The mirrored room and all that infrastructure – they are just the tables and chairs, and should never be confused with the main course.

(1) Susan Abbott is a qualitative researcher, facilitator and consultant specializing in customer experience. She helps organizations discover insights, design innovative solutions, and deliver results.
(2) Chris Shields Kann is the President and Owner of CSK Marketing, Inc., a marketing services firm that provides marketing assistance in the form of qualitative market research, facilitation, and product management support.
(3) Excerpts from a speech given by Malcolm Gladwell to the American Association of Advertising Agencies' Account Planning Conference in 2005, published in Advertising Age under the title “Focus groups should be abolished”, August 8, 2005.
This post was originally posted on GreenBook Directory website.
Publicado por A WINDOW en 20:56

Spanish attendance to bars is changing. This article sheds light on the reasons that explain why the average purchase per person has increased during the current crisis in Spain, even though the sales figures of the restaurant industry have shown a decline.

According to NPD Group’s Consumer report on Eating Trends, the Spanish restaurant industry, as well as ready-to-eat foods/beverages retail establishments suffered a drop in its sales of 2% along 2010.

In fact, if compared with 2006, the study shows that the restaurant industry has lost around 40 visits per person and year. This represents roughly the loss of 1 visit per week. In spite of this, NPD stresses the fact that Spain is still amongst the European countries where people enjoy eating out more frequently.

The lost in sales is partially put down to a fall in the visits of clients, which showed a 3% decline across 2010. In the hospitality business, some believe that any explanation of the facts should consider a three-fold perspective:
However, what is most striking is that Spaniards increased the average expenditure by 1% during the same period. It is possible to infer that this behaviour is also a consequence of the economic crisis itself, as individuals go less frequently to the bar, but when they go, they tend to indulge themselves lavishly. Arguably, it doesn’t seem to be a bad way to face the crisis!
Publicado por A WINDOW en 20:48